In Venezuela, shaping a quality public arena is imperative so that revenge is not taken following the current rule, hence the need for rebuilding, right now, the role of the political class, the media, and organized citizens.

By Rodolfo A. Rico

Freedom of expression is essential for any democracy; but the quality of that freedom is also important. Information bubbles promote individual bias, which in turn encourages polarization fueled in part by misinformation. All this ends up impairing our Latin American democracies.

It is of essence to improve public opinion, which is the common meeting space, as well as the debate of contrasting and interacting ideas in a democracy. There are three potential factors for this improvement:

A political class agreeing that betting again on debating ideas is more important than imposing them with propaganda, one trying to appeal to reason more often than to emotion.

Secondly, the media, which must move away from the trenches of political strife to return to the public arena. They must get back to making room for others, for those who do not follow an outlet’s editorial policy, to prompt their own readership not with mottos but with the contrast of proposals.

The media must bet again on explaining, on contributing solutions, on spotting opportunities. Checking those in power continues to be as important as ever; but the growing fragmentation of audiences makes it equally important to identify options and not only to tell stories of failures, because such stories end up being nihilistic and stifle public debate and, ultimately, democracy.

Thirdly, there are the organized citizens – what is usually called the civil society – or ordinary citizens – not from organizations, but from an agenda – who must be more challenging towards the media and the public debate. However, it is also necessary, from citizens’ groups, not only to spot the issues but also to devise possible solutions, proposals, options other than the assumption that there is only an abyss at the end of the tunnel.

Let us not be deceived, polarization is good business for platforms, for some media, and for politicians. By polarizing platforms, niches are clearly built for advertisers, the media get loyal subscribers willing to pay for them, and militant politicians shop for ideas without questioning anything.

Technology is not neutral. That is why it must promote democracy, shatter information bubbles, and point to options and solutions. This means going beyond the citizen technology from a few years ago: It is not enough to have software at the service of participation, the promotion of public access data, or government transparency. There must be a clear commitment to depolarization, diversity, and solutions.

In Venezuela’s case, this is imperative for the day after, so that revenge is not exacted following the current rule; but it must start now. Venezuela is an extreme case. However, across Latin America, polarization, regardless of political banner, is leaving wounds in our democracies.

It is imperative to create algorithms for depolarization, for meeting the other halfway; tools so that a journalism committed to solutions and not only to whistleblowing can appeal to audiences. Non-governmental organizations must also be strengthened to raise awareness of the logic of disinformation, of solutions-oriented journalism, and of how its work can rise above a litany of bad news. A new political leadership must also be trained to transcend slogans and propaganda and bet more on political pedagogy and argumentation. 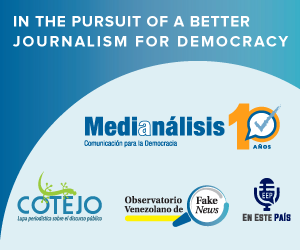 Malicious intent: The Bolivarian troupe in the Colombian protests

Venezuela and the United States. Questions on Biden’s victory

Venezuela: Disinformation and elections in the United States